The Federal Arbitration Act establishes a federal policy in favor of arbitration agreements and provides for enforcement in federal court of many agreements to arbitrate.  9 USC §§ 1, 4.  Section 16(b) of the Arbitration Act goes so far as to say that a federal trial court’s interlocutory order compelling the parties to engage in arbitration in accordance with the arbitration agreement may not be appealed.  Notwithstanding that prohibition against appeals from trial court orders directing parties to proceed to arbitration, the United States Court of Appeals for the Fourth Circuit recently accepted and decided an appeal of such an order, and reversed the trial court’s order compelling arbitration.   The Fourth Circuit held that it could do so under the seldom used doctrine of pendent appellate  jurisdiction.  Lyons v. PNC Bank, – F3d – (Fourth Circuit Slip Op. No. 21-1058, February 15, 2022).

In Lyons, bank customer Lyons was past due on the balance on a home equity line of credit.  The defendant bank, PNC, offset against that debt funds it held in two separate deposit accounts that Lyons had opened at the bank at various times.  The first deposit account was opened in 2010 (the “First Deposit Account”) and a later account was opened in 2014 (“Second Deposit Account”).  Both accounts authorized PNC to use deposits to setoff Lyons’s debts to PNC.

But in order to reach that holding, and reverse the trial court’s order compelling arbitration of the dispute about the First Deposit Account offset, the Fourth Circuit  had to decide whether the Court even had jurisdiction to review the trial court’s order compelling arbitration, given the statutory prohibition of appeals from orders to compel arbitration in Section 16(b) of the FAA described above.  The panel majority held that the Court did have this power under the doctrine of pendent appellate jurisdiction and said that it joined at least the Ninth and Seventh Circuits in holding that the Federal Arbitration Act §16(b) does not eliminate that doctrine or prevent its application when the pendant-jurisdiction rationale and requirements are otherwise met.

The Lyons majority explained that the doctrine of pendent appellate jurisdiction is a limited and narrow exception “driven by considerations of need, rather than efficiency.”  Slip Op. at 17 (quoting Rux v. Republic of Sudan, 461, F.3d 461 475 (4th Cir. 2006).  The doctrine is appropriate when the otherwise unappealable issue (here, the order compelling arbitration about the First Deposit Account setoff) is “inextricably intertwined” with an issue that is immediately appealable (here, the order denying the motion to compel arbitration of the Second Deposit Account setoff), or is required to be determined in order to ensure meaningful review of the appealable issue.

Circuit Judge Quattlebaum concurred and dissented.  He agreed with the majority that the Dodd-Frank amendments to TILA prohibit mandatory arbitration agreements such as those in this case and require affirmance of the trial court’s denial of the bank’s motion to compel arbitration of the Second Deposit Account dispute, which was the subject of PNC’s appeal.  But Judge Quattlebaum would stop there and decline to address the issue of Lyons’s cross-appeal seeking to overturn the trial court’s order compelling Lyons to arbitrate the First Deposit Account offset.  In Judge Quattlebaum’s view, the Fourth Circuit simply had no jurisdiction to reach that issue.

In his dissent on this point, Judge Quattlebaum explained that the pendent appellate jurisdiction doctrine is a judicially created, discretionary exception to the final judgment requirement allowing non-final orders to be considered on appeal because of their interconnection with appealable orders.  He disagreed with the view of the panel majority that this doctrine can displace the Federal Arbitration Act’s explicit statutory bar of an appeal of an interlocutory order to compel arbitration.  Judge Quattlebaum also noted that other federal Circuits are split on the issue and expressed his belief  that the Fourth Circuit precedents regarding the Federal Arbitration Act, while not strictly on point, “point in a different direction” than the conclusion of the panel majority. 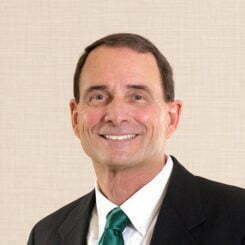