In the summer of 1968, I was one of six “summer associates” working at what was then known as Venable, Baetjer and Howard. Joe Kaplan was a “real” associate who had been with the firm for a few years after a stint at the U.S. Attorney’s office. He was a pretty serious fellow. Unlike several of his peers, Joe didn’t participate in any of our rowdy activities. Although I didn’t get to know him well, he seemed like a decent enough guy. I joined Venable as a “real” associate the next year. By then Joe and Ben Civilletti had become partners in the firm. Not long after that, Venable formalized its operations and established separate departments, acknowledging that most of the lawyers were specializing in various areas of law practice. Litigation was one of the new departments. In addition to Joe and Ben, the litigation department included such stars as Frank Murnaghan, John Henry Lewin, Sr. and John Henry Lewin, Jr. When the associates were asked what department they wanted to be assigned to, I jumped at the opportunity to join the litigation group.

Joe was my first supervisor. He assigned work to me and reviewed my work product. I second-chaired a criminal jury case that Joe tried before Judge Northrop in the U.S. District Court. I’m pretty sure Joe would agree that trying a case, especially to a jury, was not his strong suit. I would like to say that my relationship with Joe blossomed during the time I was assigned to him. But that would be untrue. My lack of maturity prevented me from seeing the qualities that made Joe such an exceptional judge later in his career. Despite the rocky start, over time Joe and I settled into a warm friendship. I was later assigned to work with Frank Murnaghan which turned out to be the biggest break of my career. But unfortunately, I missed the fun of working with Joe when he represented Lester Matz, the engineer whose testimony toppled Spiro T. Agnew, the Vice President of the United States.

I became a partner in Venable in 1977, the same year that Joe realized his lifelong ambition when Governor Marvin Mandel appointed him to the Circuit Court for Baltimore City. (It might have still been the Supreme Bench of Baltimore City). Joe quickly established himself as one of the best judges on the court. He was well-prepared, decisive, well-versed in the law, respectful of lawyers and their clients and scrupulously fair. When you had to try a difficult case, you hoped that it was assigned to Judge Kaplan. The judicial powers that be recognized Joe’s qualities and he was appointed Administrative Judge, responsible for overall supervision of the Circuit Court.

Fast forward to 1995, I was asked to represent the Maryland Institute College of Art (now MICA) in a long-simmering dispute with the Baltimore Museum of Art and the Walters Art Gallery over the ownership of a huge collection of works on paper and other objects known as the Lucas Collection. Andy Graham represented the BMA and Mel Sykes represented the Walters. We met with Joe to ask him to assign the case to an individual judge. Without hesitating, Joe said, “I’ll take it.” With most of Baltimore’s upper crust on one of the institutions’ boards, the case generated a lot of emotion and publicity. Joe managed those forces effortlessly. After a particularly tense hearing, Joe looked down from the bench and said, “I want to see counsel in my chambers.” We all trooped in and sat down after Joe took his seat at the head of the table. He looked around and asked, “Where are the Mayor and the Governor?” Thinking the judge may not have understood that the museums and MICA were private entities, I took it upon myself to let him know that the Mayor and the Governor were not involved in this matter. A twinkle appeared in Joe’s eye and he responded, “Well, they need to be involved. You guys can’t settle this case without them.” Sure enough, several months later, the State of Maryland contributed millions of dollars which, along with matching funds raised by the museums, permitted the BMA to purchase the Lucas Collection from MICA. It was a classic win-win for the parties and a classic Joe Kaplan.

Rest in peace, Your Honor. People like you don’t come around very often. 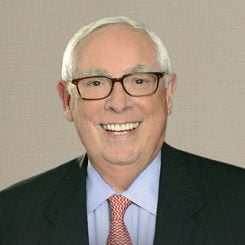